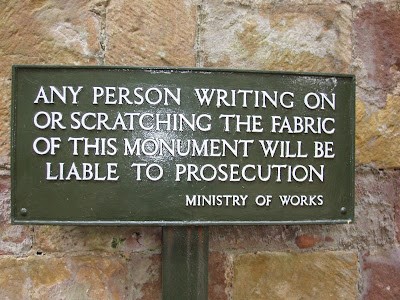 I love it...hence the photo.

Something which isn't regarded as too decent (nowadays) is this........ 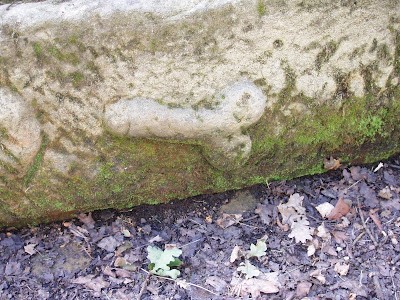 But they were regarded as perfectly acceptable by the Romans who saw them as good luck symbols meant to ward off evil. As you walk along the Wall you will see lots of them especially at forts and in many places along the wall itself.

Phallus - Wikipedia
Hunter Davies made a special attempt to find this one (the one in the photo) over at Chesters Bridge Abutment.

"It was one of the first things I searched for, but I was having no luck till the occupants of the land rover emerged, now that the rain had slackened. Three middle-aged workmen appeared with rakes and began sweeping the last of the autumn leaves, silently and separately, lost in their own thoughts. They were obviously council workmen. I said excuse me to one of them, where's the phallus. 'Follow me,' he replied, showing no surprise. 'Here's the fellow.' And he was a fine fellow indeed, plump and well formed, with two neat testicles, beautifully carved on a stone facing the river. 'Magnificent workmanship,' he said, beaming.

Transcribed from: p.66/67 The Chapter on Chesters, A Walk along the Wall (A Journey along Hadrian's Wall) by Hunter Davies. (First printed in 1974.)

A Walk Along The Wall by Hunter Davies (goodreads.com)