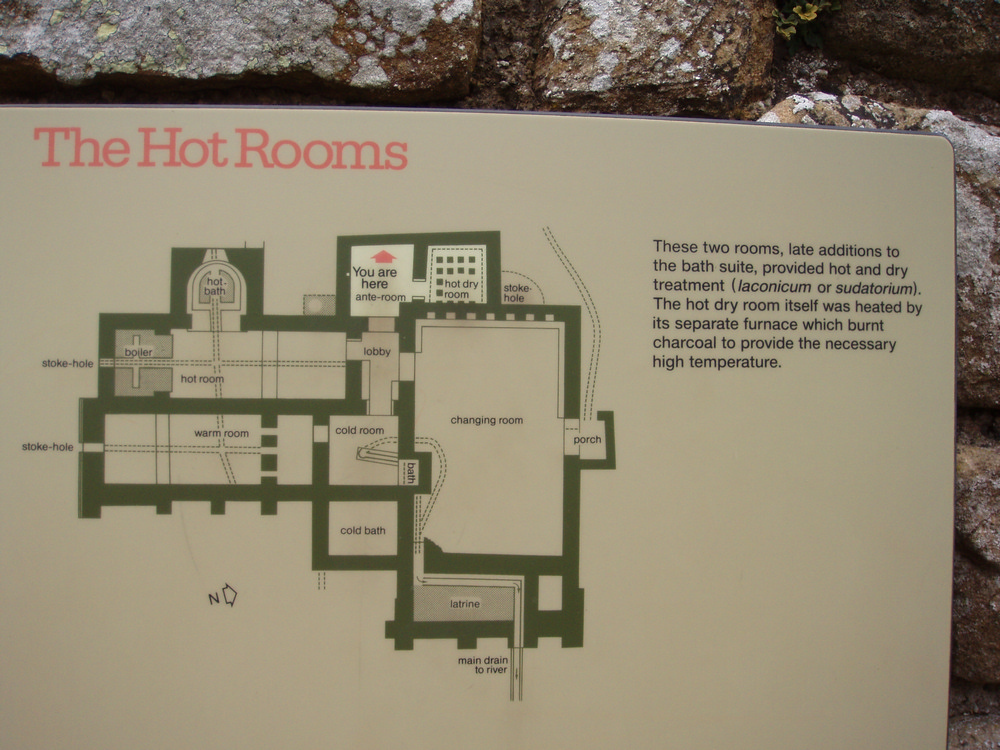 The "niches" at Chesters Bath House. If you do ever get a chance to visit the Wall and you haven't got much time...then I would recommend a visit to Chesters. (Naturally my favourite site is Vindolanda but for different reasons.) It is a stupendous setting with splendiferous views.

This is the most complete bath house to be found along Hadrian's Wall and you can wander through each of the rooms imagining what it must have been like to have a bathe all those years ago. (There are two equally interesting ones at Vindolanda.) It has been fully recreated over at the "Segendum" fort over at Wallsend. (Don't miss that either - if possible!)

I'll be talking more about these bath houses and others in due course.

Bath houses in Roman times were a meeting place (as well as a place to get clean). Sports, gambling, bathing, gossiping, eating, drinking (sometimes stealing) and much more! Here goes...:

"Every Roman town worthy of the name had its own public baths and every military establishment had its set of bath houses placed just outside the fort, for the use of the soldiers and eventually for the inhabitants of the vicus ("village"). (Inside the fort the commandant had his own private bath suite.) Wherever the Romans went, they brought their baths. It was almost a fetish with them, yet a very practical fetish. The British in setting up their Empire in the far corners of the world took much stranger fetishes with them, such as cricket.

Hadrian, that great promoter of urban life, encouraged them to be set up. In towns they were erected at the expense of the town council and were open to all. All Romans took a bath daily and the leading Britons soon followed, as they did with other Roman customs. It's strange to think that baths became commonplace for the three hundred years or so that the Romans were here, yet once they'd gone, not just the habit but the knowledge of public bathing went as well. Throughout medieval England, until as late as the Victorian age, even the noblest in the land must have smelled a long way off. It's only relatively recently that bathing has become a regular habit once again.

Going to the baths was a social occasion for the Romans. Seneca in one of his essays describes what it was like if you were unlucky enough to live too near to the public baths. 'The sound of voices is enough to make one sick.' He had to put up with the groans of the weight lifters, the slapping of the masseurs as they pummelled away (with hands open or cupped), the splashings of the swimmers, the shouts of the arguers, the cries of the sausage sellers and puff pastrymen, singers singing, umpires calling out the score in a ball game and the howls caused by the removers of surplus hair. 'It would disgust me to give details,' he finally adds, making one wonder what else could possibly be going on."

From Hunter Davies' Walk Along the Wall (A Journey along Hadrian's Wall) p.69/70

The Town Of Wallsend – Discover Wallsend In North Tyneside (wallsendtown.co.uk)