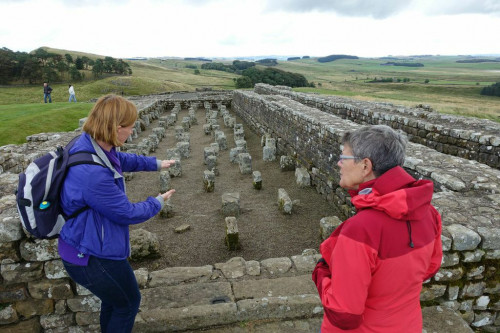 We will be starting at Birdoswald Roman Fort (English Heritage) and I will be showing you the Roman Fort from Pre-Roman times and beyond (if we are lucky we will see some Newcastle University/EH excavations happening at the Fort). We will then walk along the best Roman Wall Mile of Hadrian’s Wall (English Heritage) up into Gilsland Village, itself. On the way we will see the remains of a Roman milecastle, Roman bridge, a Roman centurial stone, Roman Turrets and much more!

We will be making a refreshment stop at Meg’s café, home of the infamous Meg Teasdale of Mump’s Hall, where I will talk about Sir Walter Scott, his novels and The Rebellious Reivers. (We will have a hot drink or juice and biscuits there.) I will be laying out the scene of how vibrant and cosmopolitan Gilsland was in the Victorian/Edwardian/Modern Age.

We will then walk to the Newcastle-Carlisle Railway and I will be pointing out the Gilsland Spa Hotel. We will also have time to discover how life was lived in Gilsland Village throughout the ages and hearing about the history of the Village Hall/Reading Rooms. We will finish the tour at the rear of the Samson Inn after seeing the perfectly preserved Roman Milecastle 48 of Poltross/The King’s Stables.

There will be variations on the tour depending on the date (but no deviation of route) on Hadrian's Birthday, St. Patrick's Day, the anniversary of the battle of Culloden, Sir Walter Scott (birth and death dates), Halloween and Saturnalia. There is a lot to find out about Gilsland – The Story of St. Patrick, Ghost Stories, Ballads, Jacobites (as seen in the TV series - Outlander), King Arthur, Ballads, Myths and Legends…join the tour to find out more!

It will be a standard tour covering a day and is suitable for adults and children. Maximum 20 people. The tour is not suitable, unfortunately, for wheelchair users due to the uneven nature of the ground we will be covering.

Location / Address to meet up

We gather in the courtyard for 10.45am; walk along the Wall to Gilsland and aiming to be at Meg’s Café for lunchtime – finishing at the rear of Samson Inn around 3pm.
There is an English Heritage car park at Birdoswald where cars can be left. There is a fee to pay which is refunded at the Fort on purchase of tickets. (This can all be arranged at Birdoswald Fort.)